Spreading Passion for Tea, from a College Club to a Mobile App

Six years ago, I left China to study at an American high school. Upon my arrival, I discovered in my suitcase dozens of tea sachets that my parents had secretly placed. As I started tasting those green teas from my hometown Chengdu, I became increasingly interested in the Chinese tea culture.

When I returned home in the summer of 2016, I decided to take lessons from a tea connoisseur. From the one-month training, I learned about the processing and brewing methods for different types of tea, the making and evolution of tea pottery and porcelain, and the history of tea throughout Chinese dynasties.

I consider myself fortunate to have gotten to know the profound Chinese tea culture, as only a small percentage of tea drinkers know or have the opportunity to learn the stories behind tea. As I returned to the U.S. to finish my senior year of high school, I brought with me a tea set and a few generic loose leaf teas. Gradually, I shared tea and introduced tea culture to people in my surroundings, which marked the beginning of my tea journey.

Now, as the founder of a tea app with thousands of users from all over the world, I couldn’t feel more grateful for what this journey has brought to me. In this article, I’d like to tell you about how I shared my passion for tea with others and got where I am today.

Starting a Tea Club as a Freshman

Before I came to Duke University, I had never thought about starting a tea club. But after I hosted a couple of tea gatherings with my friends, they encouraged me to start a tea club. Perhaps they weren’t serious, but as I pondered this idea, I started to take it more seriously.

Two months into college, I decided to give it a try by posting on a Facebook group of students in my class. Within a day, the post received nearly 400 comments with interested students’ email IDs, and I was amazed and excited by their enthusiasm. Ten days later, I organized our first interest meeting, where more than 30 students attended, tasted tea together, and learned some basic knowledge about tea.

With the mission of “promoting cultural communications” and “building a community around tea”, Duke CommuniTEA was founded. Looking back, starting a tea club as a freshman was a bold decision for me. Fresh off the boat, I was still adapting to the new environment. However, I regarded spreading tea culture as my mission, and I was determined to make that happen.

I began to search around and, fortunately, found a tea enthusiast from Beijing who’s living near Durham. Together, we hosted three Gongfu tea ceremonies in the first few months of the club’s formation, where dozens of students from different places and cultural backgrounds came together to share the same tea and become friends with each other.

Even though our event participants were curious about Chinese tea culture, it was very different from their everyday tea drinking habits. As a result, it was hard to retain their interest in the long term, and I started brainstorming better ways to introduce them to tea and help them progress gradually on their tea journeys.

Building a Community of Tea Drinkers

Upon entering my sophomore year, I developed two types of tea-related events:

By the end of my sophomore year, a nine-person executive board with two committees, tea culture and boba committees, was formed. Shortly after, our mailing list reached a milestone of a thousand people who had participated in our events.

In my junior year, our team decided to replace tea bags with tea ball infusers and disposable cups with glass mugs. But shortly afterward, we boldly restructured TeaGather to be a tea tasting event with three Gongfu stations so that we could focus on Chinese tea. I trained a few dedicated club members to brew tea in the Gongfu style, who would then introduce and serve tea at each station during TeaGather.

A few months before the pandemic, we launched more new initiatives, such as dorm tea tasting events to help connect hallmates and RAs, and a Boba tasting event with around 200 attendees. Together with two other club members, we planned a half-credit tea class on Chinese Tea Culture and History, which we just finished teaching, though virtually.

Running the club was full of ups and downs. When I was doing everything on my own in the beginning (sometimes spending 20+ hours per week), I questioned whether I should spend more time on academics and career planning like many of my peers. But as more people became interested in tea and joined me in the mission of spreading tea culture, I felt a sense of community and kept working harder.

Hitting a Wall Creating an Association

In the spring of my sophomore year, I was invited as one of the four student representatives to discuss with Duke’s Board of Trustees about approaches to help improve students’ emotional well-being. After realizing the potential of college tea clubs on building communities and promoting wellness, I started thinking, “What if I could seek out other college tea enthusiasts and help them start tea clubs in their universities?”

Soon, I found two incoming freshmen at Duke Kunshan University (Duke’s Chinese campus) who were interested in tea and worked with them to start a tea club named DKU CommuniTEA. I also reached out to tea clubs at Cornell University, UC Davis, and Harvard Graduate School of Design, and each of their presidents at the time agreed to join the association of tea clubs.

Despite having a few branches, the association was not working as I imagined. First of all, each tea club president had different goals and levels of commitment, making communication and collaboration difficult. Also, special interest clubs are generally dependent on the leaders and thus less likely to be sustainable, especially after the founder or president graduates.

So I decided to shift the focus of the association to tea education through tea gatherings. The idea was to connect tea enthusiasts with their nearby universities so that they could organize tea gatherings and gradually build up local tea communities. I applied and was accepted into the Clinton Global Initiative University 2020 program, hoping to make tea gatherings more accessible. But unfortunately, after the pandemic hit, I had to halt my project.

I took a step back and asked myself, what are other ways that I could contribute to the tea community? If my goal was to bring more positive changes, then I should think about what problems I would be solving and what value I would be delivering.

Instead of trying to start a movement of tea clubs or tea events, I thought I could try solving the problems on my own tea journey, which later could potentially help other tea enthusiasts.

After more than two years of running the club and teaching others, I wished to take time for myself to improve my skills in tea brewing and tasting. I first tried to track my notes in a few paperback tea journals and then nearly all tea apps, but none of them had all the features I wanted. Therefore, as a Computer Science major, I had the idea of making an app myself.

I studied some wine and beer apps and wondered why there hadn’t been any tea apps made on the same level. Perhaps tea, particularly Gongfu Cha, is more niche and old-fashioned, thus not worth the opportunity cost of making a good app?

Nevertheless, these are not concerns for a college student. With my passion for tea and skills in programming, I figured that if I weren’t going to commit to this project, it would be difficult to find someone else to do it.

So I dived right in, talking to other tea enthusiasts to understand their pain points and designing the app prototype. However, I had never previously designed or made a mobile app, and I had to overcome my imposter syndrome and master all the technologies required in the process.

As all my classes moved online because of the pandemic, I got to focus on the app with the extra time. And throughout the summer, I would code for my internship during the day and the app in the evening. As a result, my programming skills improved rapidly and the app started taking shape.

In November, MyTeaPal was officially launched, an all-in-one personal tea journal, tracker, and timer app that encourages mindfulness through tea drinking. Within two weeks after the launch, I was astonished to find that tea drinkers from more than 60 countries had downloaded the app.

MyTeaPal’s launch is perhaps just the starting point of a marathon. Besides adding more features to the app, I hope to help tea drinkers learn and connect with each other, and that’s why I created MyTeaPal Community. I also would like to help share precious stories of tea enthusiasts from all over the world, and that’s why I created MyTeaPal Stories.

Now that I’ve just graduated from college, instead of working for a big tech company, I will put my heart and soul into MyTeaPal and continue my mission for spreading tea culture. If you are also interested in this mission, please reach out to me at vincent@myteapal.com, and I look forward to hearing from you! 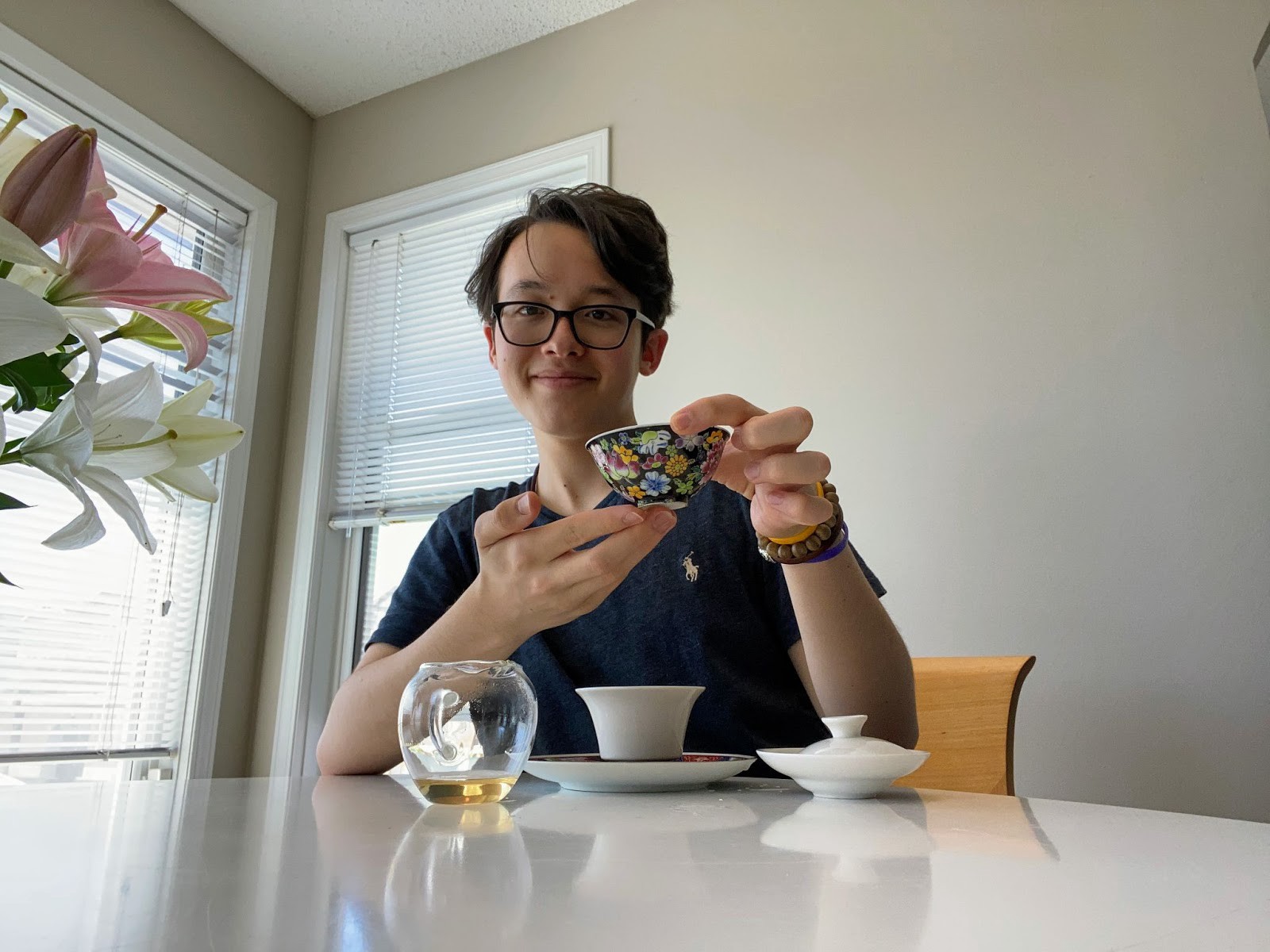 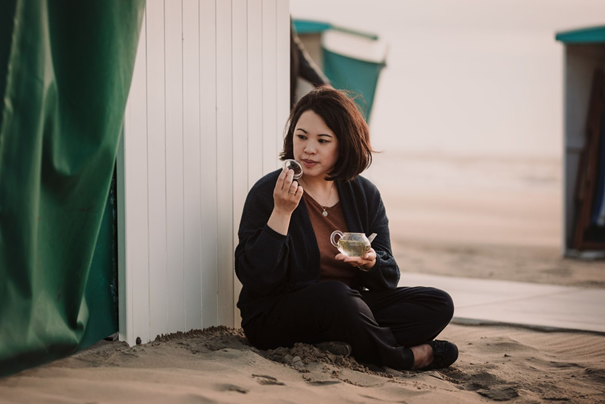 Tea Poetry: from Taste to Spirituality

Getting Published in MyTeaPal Stories